Online round table on issue: Global Constitutionalism and Legal Framework for Social Media” will be held on 8th of December, 13:00. Virtual reality coexists with real world and digital constitutionalism should address the challenges of digital world. Nowadays in Georgia, such as globally desinformation is actual issue. The round table implies discussig following issues: 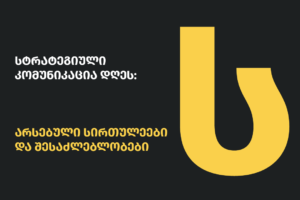 Are you a member? ავტორიზაცია